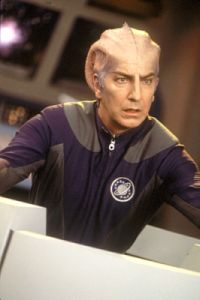 The Mak'Tar are a high developed, reptilic life form with special psionic abilities (e. g. they can do "mind-bending" and put themself in the position of others), the born scientists. Most of the time peace loving and exploring, the evil Meechans attacked them suddenly, which became the "Great war of Mak'Tar" in History. Since that time, they got the spirit of warriors additionally.

Their food consists mainly of insects and plants of different kind and their society is quite similar to the human. Usually they first want to know the motivation of a creature before they take other actions.

The language of the Mak'Tars is very logical structured. Very popular words got two syllables with a "V" in center. The Mak'Tars use special chants for certain purpose, e. g. the chant for strength is "Larak tarath".

Dr. Lazarus was the first Mak'Tar who serverd the NSEA. He is a great idol to the Mak'Tars so many othes followed him in the meantime.

The Mak'Tar believe in several gods: