Who is Travis Latke? 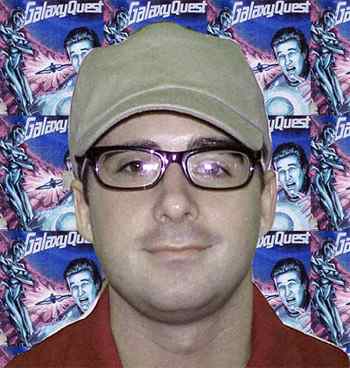 Travis Latke is a Galaxy Quest fan from the start and was the first who created a website about the series: "Travis Latke's Galaxy Quest Vaults". The design was not really good, but the website provided a picture album, funny interviews with Jason Nesmith (Commander Taggert) and Gwen DeMarco (Lt. Madison), an analysis of his 5 favourite episodes, information about the Protector, a list with description of 24 episodes (from 92) and a simple screen saver. Travis also saved the "Lost Episode" (first part of episode 52) from the footage of the studio garbage, which was finally presented by a Galaxy Quest convention. He also admit to be in love with Gwen DeMarco and to be a great fan of her. Travis works at the computer administration of the California State Polytechnic University in Pomona, California, is a member of several computer and science fiction clubs and is also interested in American history and eastern philosophy.