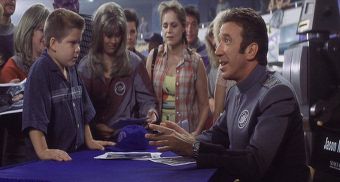 In the film's universe, the TV series Star Trek doesn't appear to exist, and instead there was the very similar TV show Galaxy Quest. Seventeen years after the series has ended, the stars of the show have been reduced to convention appearances and store openings (parodying what happened in real-life to some of the Star Trek actors). Most of the cast is resentful, embittered, jealous, or resigned. Only Jason Nesmith (Tim Allen), the egomaniacal star and crew "commander", enjoys the devoted fanbase.

At one convention, Jason meets an eccentric group of people claiming to be extraterrestrial beings called "Thermians", led by one "Mathesar" (Enrico Colantoni), who ask him to appear in what he assumes to be an amateur episode. Jason humors them, whereupon the Thermians transport him to their spaceship to negotiate with Sarris (Robin Sachs), a reptilian humanoid warlord engaged in a genocidal war against them. Sarris demands the "Omega 13”, a device mentioned (but not used) in Galaxy Quest's final episode. Jason then recklessly 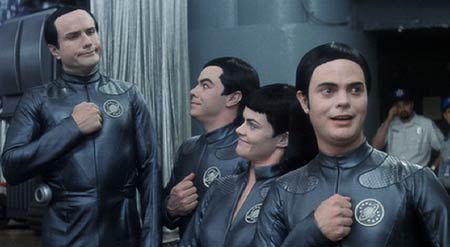 orders the Thermians to fire upon Sarris, thinking the situation is fictional. Believing his job to be done, he asks permission to return home, and is sent through space in a gelatinous "pod". Only then does he realize that his adventure was genuine. Excited about the prospect of becoming a bona fide space commander, Jason enlists the help of his fellow cast members.

The Thermians turn out to be a peaceful, naïve, octopoid alien race whose society had fallen into disarray some time ago. However, they then discovered Earth's TV transmissions and, having no concept of fiction, theatre, or pretend, mistake the Galaxy Quest episodes as factual "historical documents". Observing the success of the crew in the show, they then proceed to model their entire society after the show's example, building an actual version of the show's spaceship (the NSEA Protector), using "appearance generators" to make themselves appear humanoid, inventing actual versions of the fictional technologies portrayed in the show, and following the show's inspiring ideology.

Thus, the human cast is obliged to assume their television roles in order to survive. Early on, Sarris (having survived Jason's assault) attacks the Protector, and the ensuing fight, combined with the Protector's bungled escape through a minefield, damages the ship's reactor, which is powered by a "beryllium sphere" as on the TV show. The actors travel to a nearby planet purported to have beryllium, and steal a sphere from what appears to be an abandoned mining facility. They are attacked by the planet's goblin-like natives and flee, leaving Jason behind and in the hands of the aliens. After being knocked unconscious by the aliens via a rock to the head,

Jason is left to battle a "pig-lizard" monster as the aliens look on, chanting "Gerignak!". Fred (Tony Shalhoub) is then coaxed by the crew into operating the ship's difficult teleporter to save Jason. Fearing he might harm Jason, Fred practices by instead teleporting the monster onboard, but unfortunately it arrives inside-out and then explodes. However, the aliens continue their chant despite the monster now being gone. Activating the ship's universal translator, it is discovered that "Gerignak" is not the pig-lizard but instead a gigantic monster made out of rocks, which suddenly appears and starts attacking Jason. As Jason is about to be crushed by Gerignak, Fred manages to teleport Jason back aboard in the nick of time and completely intact.

The actors return to find the ship overrun by Sarris and his soldiers. Sarris forces Jason to reveal the fictional nature of Galaxy Quest to Mathesar, activates a self-destruct sequence on the Protector, and orders the actors released into the vacuum of space. Using a gambit from the show, the actors fake a fight amongst themselves, escape, and proceed to try and rescue the Thermians and destroy Sarris. To deactivate the self-destruct sequence, which Jason and Gwen (Sigourney Weaver) don't know how to do, Jason contacts Brandon (Justin Long), a Galaxy Quest fanboy who he accidentally traded communicators with at a convention previously. Brandon, excited at the show being "real" as he secretly suspected, guides Jason and Gwen through the Protector's dangerous inner systems to the core's control center using his encyclopedic knowledge of the ship. There, the self-destruction countdown continues even after being deactivated, before finally stopping with 1 second left, just as it always had on the TV show. En route, Brandon reveals that according to fan speculation, the Omega 13 may either be a bomb capable of destroying the universe in 13 seconds, or, as he believes, a time-machine which can send the user back 13 seconds, providing enough time to undo a single mistake. Meanwhile, actor Sir Alexander Dane (Alan Rickman) and a young Thermian named Quellek (Patrick Breen) free the Thermian prisoners. Having done so, the actors and 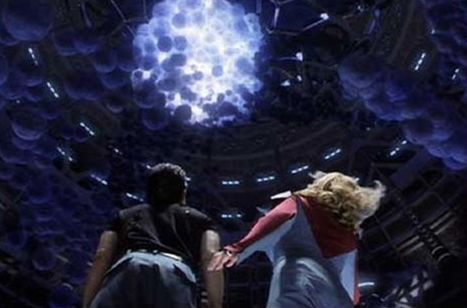 Thermians engage Sarris' ship in combat and destroy it with mines from the aforementioned minefield, Tommy having practiced piloting by re-watching old episodes of the show.

As the actors celebrate their victory, Sarris, disguised as Fred, enters the command deck and begins shooting the crew. Most are killed; but before Sarris can complete his triumph, Jason orders Mathesar to activate the Omega 13, which sends Jason back in time by 13 seconds. Jason then attacks Sarris, stripping him of his gun. When Sarris reveals a knife, Mathesar knocks him unconscious with his crutch. The humans thereafter separate the command deck from the ship to make a forced high-speed landing on Earth. Guided by Brandon with the help of his friends, the ship crashes into a parking lot, through the side of a building, and onto the stage of a Galaxy Quest convention, where the actors are late for a fan appearance. The actors step onstage, 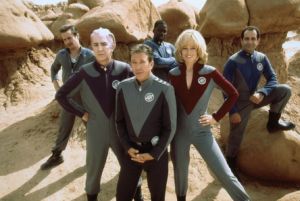 facing their adoring fans; in contrast to his earlier behavior, Jason shares the stage with his crew. Sarris then emerges onstage behind them, whereupon Jason disintegrates him with a Thermian blaster pistol. The fans perceive this as an elaborate staged scene and cheer wildly.

This spectacular display leads to a revival of the Galaxy Quest series, starring all the original cast, in addition to a Thermian named Laliari (Missi Pyle), who chooses to stay as a lover of Fred's, and former redshirt Guy (Sam Rockwell) as a new crew member, "Security Chief 'Roc' Ingersoll".